HIFU, which is short for high intensity focused ultrasound, is the focusing of high intensity sound waves to create heat at a specific point, called the focal point. With state-of-the-art technology, HIFU can be used to destroy targeted tissue during a procedure that is individually customized for each patient's prostate cancer treatment. When HIFU energy is delivered to a specific location within the body, the tissue temperature at the focal point is elevated to nearly 195 degrees Fahrenheit in a matter of seconds, resulting in tissue destruction, while the tissue outside the focal point remains unharmed.

HIFU is a revolutionary form of treatment for organ-confined disease that allows treatment of prostate cancer without radiation and without having to make a surgical incision in the body.

HIFU Treatment does not involve surgery but instead uses a High Intensity Focused Ultrasound (HIFU) beam which safely and effectively destroys the prostate tissue with minimal side effects. 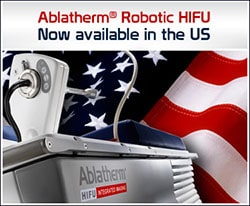 In November 2015, the FDA granted full approval to EDAP Ablatherm HIFU to carry out prostate ablation treatment in the USA. Learn more about the FDA Approval.

CMS recently announced the acceptance of a Medicare C-code application for HIFU prostate tissue ablation, which will go into effect on July 1st, 2017. This code may be applied to any procedure performed with Ablatherm, including focal, hemi-gland, whole-gland, primary or salvage HIFU prostate ablations. Hospitals offering these HIFU procedures to Medicare patients will be eligible for reimbursement.

How is a HIFU treatment performed?

HIFU treatment is performed under general or spinal anesthesia. A probe is introduced in the rectum and the imaging transducer starts the gland scanning to plan the treatment. The treatment transducer then emits high intensity focused ultrasound in the prostate gland. At the point where the ultrasound waves are focused, the absorption of the ultrasound beam creates a sudden temperature increase (around 185°F) which destroys the tissue in the targeted zone.

The treatment itself is not painful as it is carried out under spinal or general anesthesia. Pain at the end of the treatment is rare, although most patients feel a slight discomfort which resolves after a few days. The procedure is non-invasive so there are no incision or scar and patients do not experience the burning sensation often associated with radiotherapy.

Who should have this type of treatment?

HIFU is recommended for:

What is the standard follow-up after treatment?

Usually PSA levels are checked every three months and a biopsy is undertaken six to twelve months after treatment. If cancer cells remain (10 to 15% of cases), a second HIFU treatment is likely to be given a minimum of six months after the first treatment.

What is the efficiency and Quality of Life after HIFU?

Non-invasive medical technologies are intended to deliver at least the same level of clinical efficiency as traditional invasive techniques without some of the downfalls in terms of quality of life for the patient. The clinical experience gathered for more than 15 years, shows that HIFU fits perfectly in this category with an excellent risk/benefit ratio:

What are the side effects?

Trials of HIFU treatment have found few side effects. The healthy surrounding cells are not destroyed along with the cancerous cells and the procedure is non-invasive (does not involve any incision through the skin). This means only a short hospital stay is required and you will be able to return to normal activity after only a few days. The reported side effects are: Incontinence, Urinary retention, Urinary tract infections and Erectile Dysfunction. HIFU side effects compare favorably with more invasive therapies.

When Gunnison resident Les Lisowski learned he had prostate cancer, his doctor gave him five options for treatment. He and his wife, Sharie, started making a pros and cons list....

By pinpointing a genetic mechanism for aggressiveness in prostate cancer, researchers have paved the way for new treatments for advanced stages of the disease. blue ribbon, tie, and stethoscope. Scientists...